Coronavirus: a Sphinx of modern times

Entering the thoughts everyday life, the corona virus has awakened us from the deep sleep that kept human fragility confined elsewhere (children, refugees, Africa) or considered as an 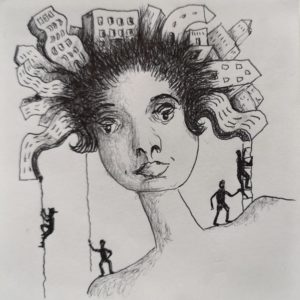 exception regarding the less fortunate, either because of their illnesses (cancers, strokes – often attributed to an unhealthy life style), or to environmental hazards of sorts.

The disorientation and fragility of human condition

The course of humanity (described by Harari in his book Sapiens. A brief history of Humankind, 2011, 5 million copies sold, translated in 30 languages) seems to have been interrupted, facing us with a sense of disorientation and with the fear of being lost.

Everyone’s eyes lift from the smart phone they had been navigating the web with until that moment, sustaining the idea that one can light heartedly dismiss the limits and fragilities of the human predicament. Everyone is summoned to reflect upon themselves and on their place in relationships with other people, animals, plants and matter.

The Corona virus is the Sphinx

All of the sudden a tiny microscopic virus with spikes questions mankind, a new kind of Sphinx bars the road and poses an enigma.

The immediate reaction is of course to avoid the crossroad that forces us to contend with human fragility and to take shelter in thoughts that provide some kind of respite from becoming aware of the situation (fleeing the country, isolation); or, an overwhelming sensation of fear and of not knowing where to turn in such an unexpected and unforeseen situation (rushing to shop for groceries – one never knows what may happen).

The next reaction that also provides some degree of momentary relief, is to accuse the people who have issued the guidelines to curtail the general population’s health of being wrong, many times without even examining the advice given. It is simply an understandable defensive reaction to cast out the angst of being met with the invisible and insidious enemy, and the request and need of protection that will be denied.

Abruptly and brutally confronted with the forgotten fragility of the human condition, we however have an opportunity to rediscover three sources of strength that have been dismissed as uninteresting. We can all assume our personal responsibility in a renewed fashion and with greater awareness abiding by the rules that protect us and the people close to us (for example by avoiding situations that amplify the contagious note of this virus). The pleasure that comes from being responsible and being able to take care of one’s self and those who depend upon us is an extraordinary antidote to fear as it allows us to uncover unknown energies and use them to secure ourselves and others. Everyone can do something.

Another source of energy consists in becoming aware of how important the “hideous others” who we share the world with actually are to us. The people we distractedly brush by everyday and rediscover when for some reason, as is happening now, they evaporate, disappear from the train stations, from bars, from the streets and classrooms and make us feel poor, deprived of our community and sense of belonging.

But the most important of all resources is the chance to overcome the fears raised by the sudden perception of our fragility (often used to create an easy bias for some form of propaganda) by relying on the knowledge provided by men and women of science: they and only they have the tools to give useful advice on what measures to take.

The antidote to fear

Simple, essential, precise guidelines that come from those who investigate the pathological effects of the virus, are a good antidote to fear as they re-establish the contact with the emotional experience of trust in a caregiver, the trust that kept us all alive at the beginning of our existence.

Furthermore the trust we place in researchers exploring the unknown, who study the virus and the ways to contend with it (vaccines, prevention, diagnosis) continues in the footsteps laid down over centuries, of man’s ability to study the heavens and Earth, the planets and animals, despite his intrinsic fragility (let us keep in mind that Rita Levi Montalcini identified the NGF, the neuron growth factor in snake venom and Fleming’s discovery of penicillin came from studying molds).

Personal and community responsibility, a confident ear lent to those who boldly explore the unknown instead of shunning it and resorting to what is already known, help us confront human fears, keep our eyes open and our vision focused on the future of new generations.

“We may insist as often as we like that man’s intellect is powerless in comparison with his instinctual life, and we may be right in this. Nevertheless, there is something peculiar about this weakness. The voice of the intellect is a soft one, but it does not rest till it has gained a hearing. Finally, after a countless succession of rebuffs, it succeeds. This is one of the few points on which one may be optimistic about the future of mankind, but it is in itself a point of no small importance. And from it one can derive yet other hopes.” Freud S. (1927). The future of an Illusion. XXI, SE, 52.

This website uses cookies to improve your experience while you navigate through the website. Out of these, the cookies that are categorized as necessary are stored on your browser as they are essential for the working of basic functionalities of the website. We also use third-party cookies that help us analyze and understand how you use this website. These cookies will be stored in your browser only with your consent. You also have the option to opt-out of these cookies. But opting out of some of these cookies may affect your browsing experience.
Necessary Sempre abilitato
Necessary cookies are absolutely essential for the website to function properly. This category only includes cookies that ensures basic functionalities and security features of the website. These cookies do not store any personal information.
Non-necessary
Any cookies that may not be particularly necessary for the website to function and is used specifically to collect user personal data via analytics, ads, other embedded contents are termed as non-necessary cookies. It is mandatory to procure user consent prior to running these cookies on your website.
ACCETTA E SALVA